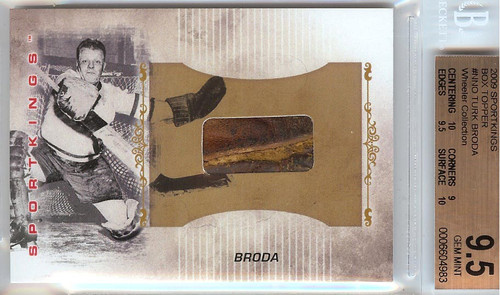 2009 SPORTKINGS GAME-USED TURK BRODA GLOVE RELIC CARD
Numbered 1/1
BGS GEM MINT 9.5!
RARE, EARLY and VERY NICE GAME-USED BRODA RELIC CARD!
Nice 1/1 card containing a game-used glove piece from Turk Broda.  Don't miss this one!
According to Wikipedia:  Walter Edward “Turk” Broda was a Canadian professional ice hockey player and coach. A goaltender, Broda played his entire career for the Toronto Maple Leafs of the National Hockey League between 1935 and 1951, taking a brief hiatus from 1943 to 1946 to fight in the Second World War.
(Item is in hand and will ship to you the next business day after payment is received)
Card will be shipped via USPS insured mail, free of charge.
If you’re looking for the best...Wheeler Collection has it!  Be on the look out for more high-end singles and sealed product from Wheeler Collections coming soon.