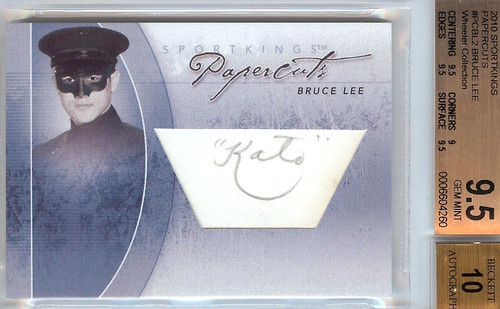 1st of two payments for:
2010 SPORTKINGS "PAPERCUTS" BRUCE LEE AS "KATO" CUT AUTOGRAPH CARD - #PC-BL2
Numbered 1/1
BGS GEM MINT 9.5 w/ PRISTINE 10 AUTO
VERY NICE "KATO" AUTOGRAPH!
EXCEEDINGLY rare, beautiful 1/1 cut auto of the legendary Bruce Lee as Kato.  Bruce Lee portrayed "Kato" in the hit television series "The Green Hornet" in the 1960s.  You won't want to miss this one!
According to Wikipedia:  Bruce Lee (Chinese: 李小龍; born Lee Jun-fan, 李振藩; November 27, 1940 – July 20, 1973) was a Hong Kong and American martial artist, martial arts instructor, actor, director, screenwriter, producer, and philosopher. He was the founder of Jeet Kune Do, a hybrid martial arts philosophy drawing from different combat disciplines that is often credited with paving the way for modern mixed martial arts (MMA). Lee is considered by critics, media, and other martial artists to be the most influential martial artist of all time and a pop culture icon of the 20th century, who bridged the gap between East and West. He is credited with promoting Hong Kong action cinema and helping to change the way Asians were presented in American films.
Kato is a fictional character from The Green Hornet franchise. This character has appeared with the Green Hornet in radio, film, television, book and comic book versions. Kato was the Hornet's assistant and has been played by a number of actors. On radio, Kato was initially played by Raymond Hayashi, then Roland Parker who had the role for most of the run, and in the later years Mickey Tolan and Paul Carnegie.  Keye Luke took the role in the movie serials, and in the television series he was portrayed by Bruce Lee. Jay Chou played Kato in the 2011 Green Hornet film.
(Item is in hand and will ship to you the next business day after payment is received)
Card will be shipped via USPS insured mail, free of charge.
If you’re looking for the best...Wheeler Collection has it!  Be on the look out for more high-end singles and sealed product from Wheeler Collections coming soon.