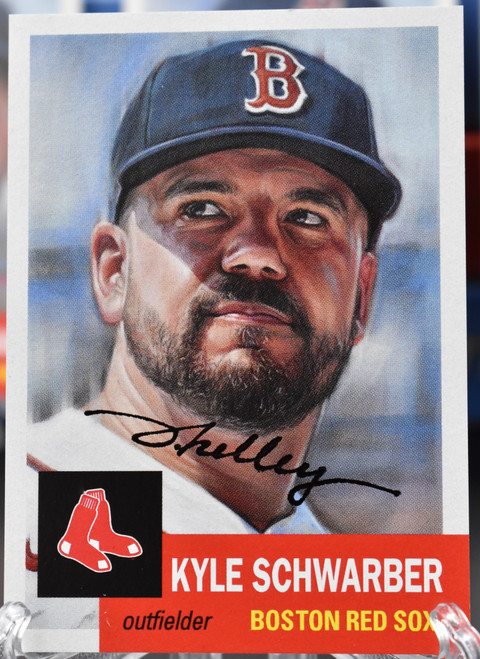 This item is in hand and ready to ship!  All cards are placed in soft sleeves and top loaders, and will ship securely.

Free shipping to all U.S. residents!

(Card pictured is only one of 100 different cards for sale and may be different from the card you receive).

This item is for one (1) limited edition, authentic Topps Living Set card of the player in the title and is hand-autographed by the artist Jared Kelley.  This card is personaly hand-numbered on the back by the artist and comes with a matching numbered, signed certificate of authenticty.  There are 5 tiers of autographs as outlined below:

(All autograph cards are the same price!  If you buy more than one, you are guaranteed to receive at least one color other than Black)

One hand-sketched Living Set box of Kyle Schwarber by Jared Kelley will be randomly inluded with 1 of the 100 cards ordered.  These art boxes are rare 1/1 pieces that look absolutely amazing in person!

Jared Kelley made his debut in our trading card hobby 10 years ago when his on-card art was featured in Upper Deck's 2011 Goodwin Champions product.  Jared's talent was put on full display with the Presidential Masterpiece painted card set that stunned the collecting community with his awe-inspiring attention to detail.  After that set, he was quickly picked up by Dr. Brian Price where his art was included in Sportkings Series D that released the following year in 2012, adding some of the hobby's most treasured art cards to collectors' vaults.

Jared later decided to step away from the hobby for a while to focus on his growing family before he and Topps made a deal in early 2021.  Topps would then introduce Jared as a distinguished sports artist who made his MLB Living Set debut a few weeks later. "Jared is an illustrator, focusing on portraiture, whose vivid and lifelike portraits have earned him acclaim among the art and trading card collecting community", wrote Topps.

Wheeler Collection is proud to assist Mr. Kelley by exclusively offering these high-quality, limited edition, artist autographed Living Set cards for sale to the public.  Jared is a family man looking to make a career of art.  I hope you will join us in helping him along the way and wishing him the very best.

All sales are final unless there is a listing error.