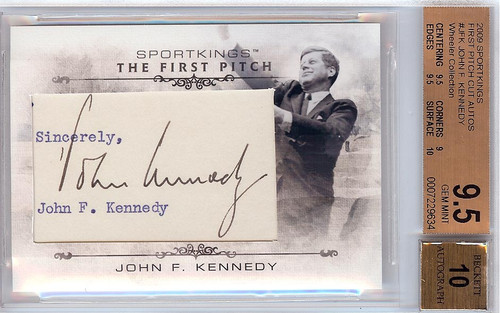 2009 SPORTKINGS "THE FIRST PITCH" JOHN F. KENNEDY CUT AUTOGRAPH CARD - #TFP-JFK
Numbered 1/1
BGS GEM MINT 9.5 w/ PRISTINE 10 AUTO!
POTUS JOHN F KENNEDY AUTOGRAPH CARD
Beautiful, bold 1/1 cut auto of former President of the United States JFK depicting a time when he threw out the ceremonial first pitch.  You won't want to miss this one!
According to Wikipedia:  John Fitzgerald Kennedy, often referred to by his initials as JFK or by the nickname Jack, was an American politician who served as the 35th president of the United States from 1961 until his assassination near the end of his third year in office. Kennedy was the youngest person to assume the presidency by election.
(Item is in hand and will ship to you the next business day after payment is received)
Card will be shipped via USPS insured mail, free of charge.